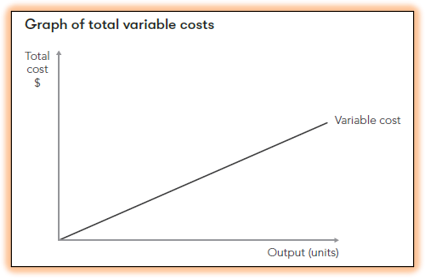 Variable costs are costs that vary directly in line with changes in the level of activity. Expressed as: Total variable cost = Variable cost per unit × Number of units

Let's run through another category within cost behaviours, and that's stepped (or "step") costs. Stepped costs are a little bit more complicated, but very simply, a step cost is a cost that increases within a certain range of activity. They don't directly change in relation to each unit being produced, but they might change if a large amount of units are produced or if there's a large decrease in units being produced. An example of that might be the cost of supervisors. We don't need an extra supervisor for each unit produced. Let’s consider the smartphone example again. If we produce an extra smartphone in the period, we don't need an extra supervisor, but if we increase the production to, say, 30,000 or 40,000, we might need an extra supervisor to look after extra shifts or the extra employees that are required to make those smartphones. You can see that within different ranges of activities and different ranges of outputs that the cost of hiring extra staff or the salaries related to supervisors will increase or decrease depending on the activity within a certain period. So, a step cost changes in relation to the range of activities. It's not directly related to each unit produced but rather to the quantity of units being produced. That's why it's called a stepped cost. Imagine a stairs: It goes up at a certain range, and then flattens again for a period, and then goes up again. Stepped costs are continually going up like a set of stairs. Hence, the graph below. 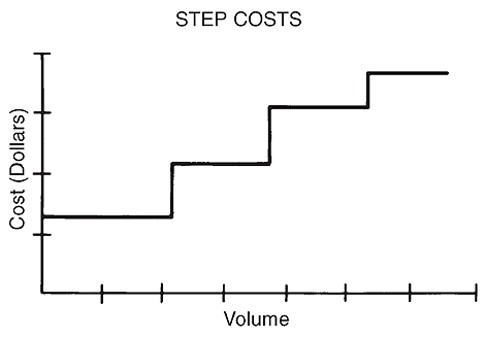 Stepped costs are costs that are fixed over a relatively small range of activity levels, but then increase in steps when certain levels of activity are reached.

The next cost behaviour that we're going to look at is semi-variable costs. These are costs that have a fixed and a variable element. So it's like putting variable and fixed costs together. A classic example of this would be electricity. There's a variable element, obviously, whereby the more units that we produce will have an impact on the cost of electricity, especially if the process involves the use of heavy electronic machinery. A good example of this is car manufacturers. The use of heavy machinery requires a lot of electricity. If more cars are produced, then that cost is going to go up. But there's also a fixed cost element to electricity in some circumstances. In some jurisdictions, there are metering charges that are the same every month. This relates to the electricity meter that you have outside your organisation whereby people can record the amount of electricity you're using. There might also be environmental taxes that could be the same for each period. These will be fixed costs because they're completely unrelated to the amount of units that are being produced. So, electricity is a good example of a semi-variable cost.

We're now going to move on to an example to make sure that everything is clear. In this example, the company is called Brunswick PLC. It's a large car manufacturer. The organisation uses a large amount of electricity per month, which is primarily driven by the amount of cars produced. Brunswick are charged per kilowatt used in the period. There is a surcharge each month that includes the cost of metering and environmental taxes. This surcharge is the same amount each period.

So, what category would the cost of electricity fit under for Brunswick PLC? Well, we have four choices again. We've stepped cost, fixed cost, variable cost, or semi-variable cost. Let’s examine the example piece by piece. This is always a good way to generate an answer. Just take all the clues in the question, look at each component and go through a process of elimination. Look at each possible answer. Evaluate and see does that fit the criteria of the question?

So, let’s do that. This organisation uses a large amount of electricity per month, which is driven by the number of cars produced. That sounds like a variable cost. The more cars that are being manufactured the higher the electricity costs. So that's very much a variable cost. But the question also mentions that there is a surcharge, an extra charge each month, which includes the cost of metering and environmental taxes. The surcharge, as it says in the question, is the same amount for each period. So, is it fixed then because it's not related to the amount of units being produced? No, because we have a variable and a fixed element in the question, we can therefore say that electricity in this case is a semi-variable cost.